Pictures of the Doing A Raspberry robot 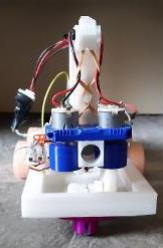 James has been taking pictures of his robot for his Arkwirght Scholarship Application and has now sent them to Mike for his Pi Wars talk, two of which are attached below.
Post a comment
Read more

January 20, 2021
I think it was back in February 2018 when  James  turned up at Leicester Hackspace along with his mother and sister with an interest in building a robot and learning some electronics and software. That summer he successfully applied for PIWARS 2019, now we just had to build a robot. Our first entry, team RATAE, was based on hardware that James already possessed, a PI0W, Pimoroni Explorer Hat and a PI Supply Controller. So James set-to designing the chassis and I said I would help with the software. We did not realise it at the start, but we were effectively building the Tiny 4WD robot. The first chassis was built out of Mecanno . Documentation on the PI Supply website led us to “Approximate Engineering’s Python Game Controller”. This is going to be simple I thought, as the software for controlling the robot was already done, I just had to interface to my Je-Vois camera, add some line following sensors and we would be started,famous last words.   James would have no problems at home
Post a comment
Read more

January 20, 2021
The Doing A Raspberry Team has entered the two previous Pi Wars/Virtual Pi Wars (2019 and 2020) as Ratae Robot (2019) and Eco Amica https://youtu.be/n0LahJH7ufs (2020).  This Blog will follow our journey towards virtual Pi Wars 2021 and hopefully it will be useful for other people (probably Beginners!) thinking of entering or entering Pi Wars. Our team consists of James, Steve, Mary, Bill and Miriam. Due to us having to work remotely and James having a lot of exams we decided to use the robot from last year and work on the software.
Post a comment
Read more